We are stuck in our home because of the spread of Coronavirus. Some think our present situation brings only negativities in life. But let us look at its bright side. The quarantine gives us time to discover and develop skills, including painting, molding, cooking, and many more. At this very moment, many are craving for the mouth-watering taste of pizza. The problem is that they can’t go outside to avail of some. Don’t worry because we find a bright solution. Do you have a cast iron pan in your kitchen? Do you have the key ingredients used for making pizza, such as flour, baking soda, some butter, and others? If so, it’s time to make your pizza by following our tips on how to make pizza in a cast iron.

Get yourself ready, as we will start sharing with you our step-by-step guide on how to make your favorite pizza using a cast iron pan.

Before we answer the question of how to make pizza in a cast iron pan, you need to consider some things. For some, making a pizza is just a piece-of-a-cake. But for starters, like you, it is overwhelming considering its separate components, such as the toppings, sauce, and dough.

With the help of a cast-iron pan, creating a geeky or simple pizza can be enjoyable and full of fun. The following are some essentials you need to keep in mind before making your pizza baked in cast iron skillet.

What are the Steps to Take When Making a Pizza in a Cast Iron Pan?

One benefit that you can get from making cast iron pan pizza is that it will not require any pre-heating, which ovens do.

So, the first step to get a tasteful pizza baked in cast iron skillet is to create your dough. Creating a dough can be done in two ways, either using a machine or by hands. To make the base of your pizza, you need to grab a medium-sized bowl. Put one teaspoon of sugar, one teaspoon of fresh yeast, and a half cup of filtered water. Gently stir it. Make sure that the yeast is still alive by setting the mixture for five minutes.

After five minutes, the next step on how to make pizza in a cast iron is to add some drops of extra virgin olive oil, one-half teaspoon of salt, and one cup of flour. With the use of a silicone spatula, start mixing all the ingredients. If you don’t have a spatula, you can use your hands for mixing.

After ensuring that all the ingredients are mixed, spread some amount of flour on your hands, transfer it to the dough, and start needing. Make sure that the dough will not tear. You can also add some EVOO to create a shiny dough finish. Let it sit for one and a half hours.

After one and a half hours, it will double the size of the dough. Now, grab your cast iron pan. Put a small amount of EVOO to the pan to avoid the sticking of the dough. It will surprise you, but your pizza baked in cast iron skillet would taste better if you will season the pan (not the dough itself) with a little shake of black pepper, a good amount of oregano, and a pinch of salt. Mix it to coat the entire area of the pan.

Get your dough while your hand is still greasy. There are only three steps to follow in making dough; rotate, fall, and stretch. Do this consecutively until you reach your desired size. Let the dough sit on the pan for 30 minutes.

While waiting, it’s time to prepare the sauce. Grab some tomato sauce, mix it with olive oil, salt, and basil. Now, if you’re making a cheesy pizza, try to use mozzarella cheese considering its tasty flavor. Throw it into the freezer and prepare your toppings.

It’s cooking time! Use the large burner to make sure that it will cook the crust evenly. Place the pan to the burner. Grab the sauce you mixed a second ago and spread it evenly to the dough. After setting the dough with the sauce, start throwing your cut mozzarella cheese to it. Start from edge to edge. Put the toppings and wait until it turns medium brown.

Let your pizza baked in cast iron skillet cool down for some minutes before you transfer it to another board. Cut it into four or eight. Share it with your friends. Pick your favorite movie on Netflix and enjoy it!

The procedure on how to make pizza in a cast iron is challenging at first, especially for newbies. But once you get the hang of it, the next time you bake will be much easier. Here’s how to learn more about baking pizza.

Now that you know how to make pizza in a cast iron, you need not force yourself to go outside just to buy your favorite pizza. All you need to do is a cast iron pan, flour, salt, extra virgin olive oil, tomato sauce, and your toppings. We love to top our pizza with some bacon, green chili, and more mozzarella cheese.

This DIY pizza will not only help you save money, but it can also be the bonding time with your spouse, kids, friends, and other family members. 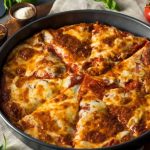 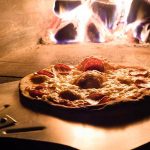 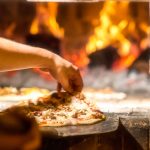 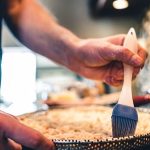 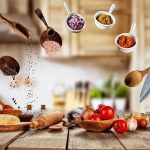 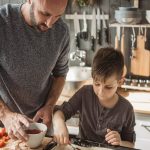 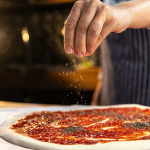 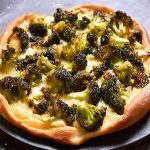